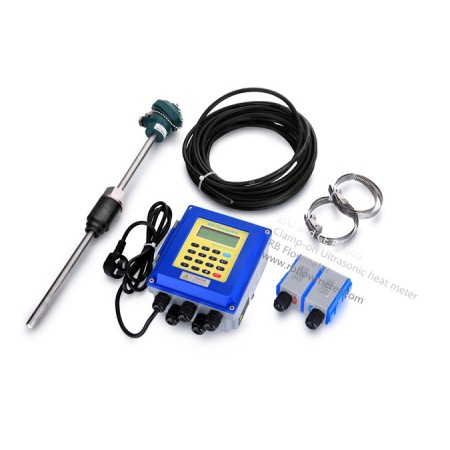 RBFM Series Clamp-on  transit time heat flow meter utilizes two transducers that function as both ultrasonic transmitters and receivers. The transducers are clamped on the outside of a closed pipe at a specific distance from each other. The transducers can be mounted in V-method in which case the ultra sound transverses the pipe twice, or W-method in which case the ultra sound transverses the pipe four times, or in Z-method in which case the transducers are mounted on opposite sides of the pipe and the ultra sound transverses the pipe only once. The selection of mounting method depends on pipe and liquid characteristics. When the flow meter works, the two transducers transmits and receives ultrasonic signals amplified by multi beam which travels firstly downstream and then upstream (Figure 1). Because  ultra sound travels faster downstream than upstream, there will be a difference of time of flight(△ｔ). When the flow is still, the time difference(△ｔ) is zero. Therefore, as long as we know the time of flight both downstream and upstream, we can work out the time difference, and then the flow velocity (V) and flow volume (Q) via the following formula.

D: Distance between the two transducers

△ｔ: Difference in time of flight