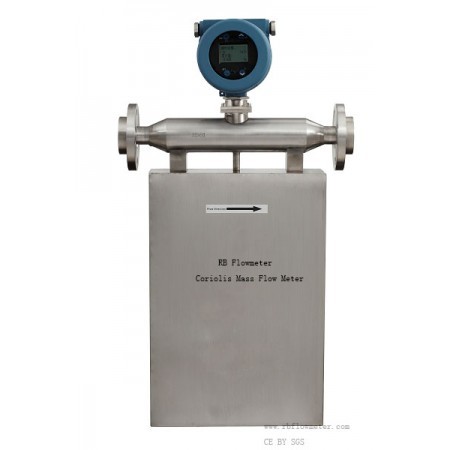 RBCM Coriolis Mass Flow meters based on Coriolis theory. The Mass flow meter is measurable of liquid, gas, liquid-solid and gas-solid two phase fluid mass flow instantaneous rate and cumulative total and realizes display and remote transmitter of all measuring parameters. In addition, the intelligent transducer is able to display the fluid temperature, density and percentage of two-phase fluid. It also has total quantitative control function.

Our company has strong technical forces and is capable of designing, install, adjust and make comprehensive analysis to the problems in manufacturing process. We will offer the best measuring solution. High/low temperature, high pressure, high viscosity, micro flow, large temperature and pressure fluctuations, rapid response, and accuracy, all the problems mentioned above we can handle in the best way. Meanwhile, these flow meters can be used as density meters.

We are not only the expert of fluid measurement, but also the expert of automatic instrument. Hand your trouble to us and you will get the best harvest. We’ll provide the most effective solution to the enterprises that have the measure requirement by using optimum allocation, perfect function, simple operation, thoughtful service and strong support. Believe we will rapidly become domestic first-class and international standard new flagship in the flow measurement industry.

RBCM Coriolis flow meters are instruments that, using the Coriolis principle, measure directly the mass flow rate of a process. The Coriolis force is the phenomenon that causes objects to appear to curve as they move across the surface of the earth.

A Coriolis meter artificially introduces a positive and negative Coriolis acceleration to the process. As illustrated in the diagram below, the entire process is split and re-directed through two curved tubes. The tubes are vibrated at a multiple of their natural resonant frequency. Miniature velocity transducers comprising of a coil & a magnet are each mounted on one of the tubes as shown. When no flow is present the tubes vibrate and the sine wave output of each velocity transducer is in phase. When flow is initiated the tubes will begin to twist due to the Coriolis acceleration induced by the moving mass. This causes the sine waves to shift in relation to one another (either lead or lag depending on the flows' direction) and a measurement is made. An added benefit of Coriolis meters is their ability to perform multiple measurements. In addition to measuring mass flow directly, Coriolis mass flow meters also measure the density of the process by monitoring the period of the tube vibration and characterizing that as a density. Advanced digital signal processing enables Coriolis meter transmitters to calculate the concentrations of two component mixture and net volumes, etc. Variations on the split-tube design now include straight-through tubes and double- looped single tubes.